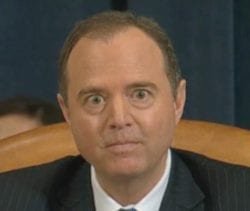 Rep. Adam Schiff, the chairman of the House Intelligence Committee, is touting a whistleblower complaint from a Department of Homeland Security official who he accused just last month of potentially lying to Congress about the agency’s intelligence-gathering activities.

On Wednesday, Schiff released a whistleblower complaint filed by Brian Murphy, the acting under secretary for intelligence and analysis, who claimed that senior DHS officials and the White House pressured him to alter intelligence reports regarding Russian interference in the 2020 election as well as about Antifa’s involvement in social justice protests.

Murphy claimed in his complaint that he was demoted on Aug. 1 because he questioned DHS leaders’ requests that he alter intelligence reports.

Schiff said in a statement on Wednesday that Murphy’s complaint “outlines grave and disturbing allegations that senior White House and Department of Homeland Security officials improperly sought to politicize, manipulate, and censor intelligence in order to benefit President Trump politically.”

“This puts our nation and its security at grave risk,” he said.

Schiff’s comments mark an about-face for the Democrat.

Schiff’s got a new “whistleblower.”

Five weeks ago, Schiff told the New York Times that the same “whistleblower” already lied to his congressional committee.

Like the #impeachment “whistleblower,” Schiff can’t keep his story straight.https://t.co/ywGPBUBWAV

He said in a statement on Aug. 3 that he was “concerned” that Murphy “provided incomplete and potentially misleading information to Committee staff” regarding the DHS intelligence and analysis branch’s intelligence-gathering activities related to protests in Portland and other cities.

The Washington Post reported on July 30 that Murphy’s division circulated intelligence reports that cited information about a New York Times journalist and Benjamin Wittes, a fellow at the Brookings Institution.

Schiff did not address whether he still believes Murphy lied to the committee. His office did not respond to a request for comment.

“To be unequivocally clear, the press reporting was significantly flawed and, in many instances, contained completely erroneous assertions,” the complaint says.

The complaint says the intelligence and analysis division “never knowingly or deliberately collected information on journalists, at least as far as Mr. Murphy is aware or ever authorized.”

According to Murphy, DHS tracked publicly available media reporting but “did not seek authorization to and was not engaging in surveillance of journalists’ private data.”

The complaint also said that any intelligence gathering regarding protesters “was done in strict compliance with existing legal guidance.”

Mark Zaid, an attorney for Murphy, said that he was unaware of what Schiff is referring to in suggesting that Murphy misled the intelligence committee.

“Regardless of what transpired prior to my involvement in representing Murphy, my focus is on ensuring the allegations being made now are properly, independently and fairly investigated by oversight authorities and that my whistleblower client doesn’t suffer retaliation for making good faith assertions of misconduct,” Zaid told The Daily Caller News Foundation.

Schiff Touts Whistleblower Complaint From DHS Official He Previously Accused Of Lying To Congress is original content from Conservative Daily News – Where Americans go for news, current events and commentary they can trust – Conservative News Website for U.S. News, Political Cartoons and more.