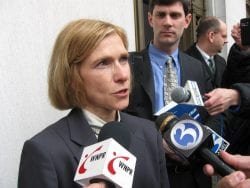 A top prosecutor in the office of U.S. Attorney John Durham submitted her resignation on Friday, The Daily Caller News Foundation has confirmed.

The Hartford Courant reported that Nora Dannehy resigned because of political pressure from Justice Department headquarters regarding Durham’s investigation into the origins of the Trump-Russia probe.

According to the Courant, associates of Dannehy’s said that she was concerned that Barr is pressuring Durham’s team to release a report on the investigation before the probe is finished.

The story notes that Dannehy is not a supporter of President Trump.

“We can confirm that she resigned (effective today), and have no further comment or background to provide,” Thomas Carson, a spokesman for the U.S. attorney’s office in Connecticut, told The Daily Caller News Foundation.

Barr tapped Durham in April 2019 to investigate FBI and CIA activities related to Trump associates during the 2016 presidential campaign. Dannehy has worked with Durham for decades, according to the Courant. She left her job for a brief stint in 2019 to work in the defense industry, but Durham recruited her to work with him again after Barr appointed to him to oversee the probe.

Democrats have criticized the investigation, claiming that Barr is directing it to provide political cover for President Trump. Despite intense scrutiny on Durham’s inquiry, few details of the probe have leaked into public view.

Durham has obtained one guilty plea so far in the investigation. Kevin Clinesmith, a former FBI attorney, pleaded guilty on Aug. 19 to altering an email from a CIA analyst in June 2017 regarding former Trump aide Carter Page.

Clinesmith’s email was described in a Justice Department inspector general’s report on the FBI’s investigation of the Trump team. The report blasted the FBI for multiple errors and omissions in applications for Foreign Intelligence Surveillance Act warrants against Carter Page.

Barr said in an interview with NBC News this week that more prosecutions could be coming in the Durham probe.

Barr has also said that Durham is investigating the possibility that Russian intelligence operatives fed disinformation to Christopher Steele, the author of a dossier that the FBI used to obtain FISA warrants against Page.

According to the Courant, Durham associates expect the investigation to be shut down if Trump loses the election in November.

The Justice Department did not respond to a request for comment.