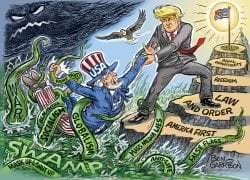 “MAGA vs. The Deep State Swamp” Number 5 in the Drain the Swamp Series

For the last four years, President Trump has tirelessly exposed the Deep State Swamp. Trump has shown the American people the ruthless corruption in our government and called out the endless propaganda of the controlled mainstream media complex.

President Trump’s first term went by quickly and although much was accomplished, there was still a lot left to do.

The swamp runs deeper than anyone ever imagined.

He’s a career politician known for groping and sniffing females—adults and children alike. He made it possible for his son Hunter to receive graft from Communist China. He believes taxpayers should fund abortion on demand. He believes in more taxes, a bigger and more bloated government, political correctness, BLM and ANTIFA, endless lockdowns, and a mask mandate. Joe is pro-war, a globalist, and he supported tossing low-level drug offenders into prison. Does this sound decent to you?

Trump is not perfect, but he stands in sharp contrast to Biden. While Joe is pro-China, Trump is pro-jobs for Americans. He wants to preserve our free speech and our right to own firearms. He is a nationalist, not a globalist. He wants to put an end to the rioting and looting. He wants elections to be held in a fair and traditional manner, while Democrats want mail-in ballots, which will open the door to fraud. Trump is anti-war. That alone is a good reason to reelect him.

The contrast between the two presidential candidates is obvious and definite. President Trump remains the only decent choice.

MAGA vs. The Swamp #5 in the Drain The Swamp Series – Ben Garrison Cartoon is original content from Conservative Daily News – Where Americans go for news, current events and commentary they can trust – Conservative News Website for U.S. News, Political Cartoons and more.