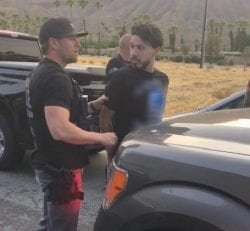 A California man was charged Thursday with firebombing the offices of a Republican women’s group earlier this year, federal authorities announced.

Carlos Espriu, 23, is accused of using Molotov cocktails to set fire to the offices of the East Valley Republican Women Federated (EVRWF) on May 31.

According to a criminal complaint filed against Espriu, he used a baseball bat to break the windows of the group’s headquarters before lighting “an improvised incendiary device” and throwing it into the building. He returned to the building twice more to throw the Molotov cocktails into the offices.

Investigators said that members of the public identified Espriu as a possible suspect in response to a reward that EVRWF offered for information about the arson.

The complaint says that investigators found that Espriu wrote on Twitter three days before the firebombing that, “I wanna go burn shit n get hit with tear gas.”

Investigators found a lighter at Espriu’s residence in July that matched the one used to light the Molotov cocktails. They also found an audio recording in which Espriu allegedly told a woman in late June that he constructed Molotov cocktails using three bottles filled with gasoline and a towel.

“He recounts the details of the firebombing as seen on the surveillance video, according to the complaint,” prosecutors said.