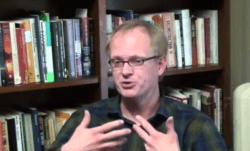 A University of Rhode Island professor has faced criticism after he justified Michael Reinoehl’s alleged shooting of “a fascist in Portland” in a blog post.

Erik Loomis, history professor and director of graduate studies at the University of Rhode Island, discussed Michael Reinoehl’s suspected shooting in a blog post published Friday and noted that Reinoehl said he was afraid the police were going to kill him before suggesting Reinoehl may have been “murdered” by police.

Loomis replied to a comment on the blog post that noted Reinoehl was suspected of killing a man.

“He killed a fascist. I see nothing wrong with it at least from a moral perspective,” Loomis replied. “Tactically, that’s a different story. But you could say the same thing about John Brown,” Loomis said, according to the blog.

Loomis was criticized for the comment and has a history of making comments against conservatives, according to Fox News. In a blog post Wednesday, Loomis called Campus Reform fascists, referencing an article published by the conservative education news outlet about his comments and his past statements.

Reinoehl was killed after a federal task force tried to arrest him in connection to the shooting of activist Aaron Danielson, law enforcement officials said to The New York Times.

“I am extremely anti-conspiracy theory. But it’s not a conspiracy theory at this point in time to wonder if the cops simply murdered him. The police is shot through with fascists from stem to stern,” Loomis wrote in his Friday blog post.

“They were openly working with the fascists in Portland, as they were in Kenosha which led to dead protestors,” the blog post continued. Loomis went on to cite a historian’s Tweet and said, “These are very dark times indeed.”

University of Rhode Island Professor Erik Loomis reacted to the execution of Trump supporter Aaron “Jay” Danielson on the streets of Portland by an Antifa extremist by commenting, “He killed a fascist. I see nothing wrong with it.”https://t.co/afj8dGlCSj

Oooh, Turley is so scary….https://t.co/6LmOOPC9dA

The University of Rhode Island and Loomis did not immediately respond to the Daily Caller News Foundation’s requests for comment.

French election 2022: Centre-right candidate could ‘knock’ Macron out at first round | World | News