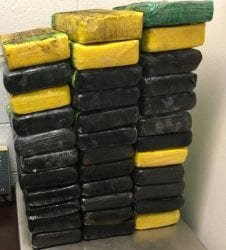 The seizure occurred on Friday, Sept. 4 when CBP officers assigned to the commercial import lot at the Starr-Camargo International Bridge encountered a tractor hauling an empty dump truck arriving from Mexico.  The 2009 Volvo tractor and trailer were referred to CBP secondary for further examination after a primary inspection.  In secondary, with the aid of a non-intrusive imaging system (NII) CBP officers discovered 35 packages containing 83.37 pounds of alleged cocaine concealed within the trailer.

The estimated street value of the narcotics from the seizure is approximately $642,940.

CBP officers seized the narcotics along with the tractor-trailer, arrested the driver, and turned him over to local authorities for further investigation.