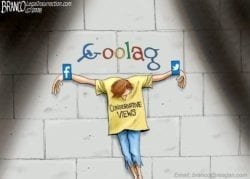 Google has not yet explained why a glitch in the online giant’s search function prevented users Tuesday from accessing the content of several news websites.

A bug in Google’s site command function caused Breitbart, the Daily Caller, The Drudge Report, Newsbusters, and other news websites to vanish Tuesday morning, media reports show. The company resolved the issue later that day, explaining in a tweet Tuesday that the malfunction did not target “particular sites or political ideologies.”

“Today’s issue affected sites representing a range of content and different viewpoints. Our ranking systems don’t index, rank or classify content based on political lean, as we’ve explained in our How Search Works site,” Google search liaison’s Twitter account noted before directing users to a page on the company’s website that explains how search algorithms work.

Google has not responded to the Daily Caller News Foundation’s request for more details about the glitch, nor has the company explained why the problem impacted websites like the Daily Caller but not others. The Washington Post and The New York Times were left unmolested, Mediaite reported.

One former Google employee believes the glitch revealed what he calls a “blacklist.”

“It appears to have revealed the existence of another blacklist that disproportionately targets conservatives,” Mike Wacker told Mediaite Tuesday. “The glitch is that sites on this blacklist disappeared from Google search results, but the existence of the list is very much by design. And that raises a major question: Why was this blacklist created in the first place, and what else is it used for?”

Google fired Wacker in 2019 after he wrote an open letter describing the company’s “outrage mobs” and “witch hunts.”

“One possibility is that sites on this blacklist are being penalized, and the glitch was that the penalty was accidentally set so high that these sites were effectively removed from Google search,” Wacker added. “I’ve found that a lot of people tend to conflate algorithms with AI since they’re both automated, but AI isn’t as objective and mechanical as algorithms are.”

Google dismissed claims that the glitch was malicious. “This issue affected a number of sites representing a range of different content and viewpoints. This issue was a technical error unrelated to the content or ideology of the sites affected,” a company spokesperson said in a statement, according to Mediaite’s report.

Google has blamed technical or human errors for problems in the past.

A glitch in YouTube’s platform enforcement system caused an algorithm to remove comments containing a phase used to criticize the Chinese Communist Party, Google-owned YouTube told the DCNF in May.

Any comment posted to YouTube containing the phrase “五毛,” which is pronounced “wumao” and translates to “50-cent party,” would be deleted within seconds with almost no warning, TechCrunch reported in May. The phrase refers to a CCP-funded project that pays social media users 50 Chinese cents for every post they publish defending the Chinese government.

The company’s search function has been the subject of an antitrust investigation the Department of Justice began in October targeting Google.

Critics argue that Google Search must be a focus of the probe, pointing to the company’s sheer market dominance. The tech titan consistently accounts for roughly 90% of online information searches, and employees have expressed a willingness to artificially manipulate search results on the platform, several outlets have reported.

Google CEO Sundar Pichai is among several tech CEOs that are expected to testify July 27 in front of the House Judiciary Antitrust Subcommittee, CNET reported Thursday. Pichai and Amazon CEO Jeff Bezos, among others, will address House lawmakers’ questions regarding their company’s market share and the degree to which they compete on a fair playing field.

Google Has Not Explained What Led To A Glitch That Blocked Some Conservative Websites is original content from Conservative Daily News – Where Americans go for news, current events and commentary they can trust – Conservative News Website for U.S. News, Political Cartoons and more.