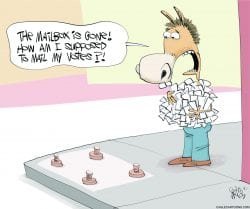 Back in May, I delivered bad news for conservatives ready to man the barricades in defense of constitutional rights confiscated by the Flustapo. We’d witnessed barbers, gym owners, hairdressers, nail technicians, restaurant owners, restaurant patrons, muscle heads, political activists, stay at home moms and various independent entrepreneurs participating in truly peaceful protests against the lockdown imposed after the Reichstag Flu.

What we never saw participating in any of those rallies were individuals who had the power to really fight the Flustapo. Our so–called conservative elected officials remained conscientious objectors due to cowardice.

One of the most remarkable examples of average Americans refusing to embrace bankruptcy came in the leftist hotbed of New Jersey. The Atilis Gym, owned by Ian Smith and Frank Trumbetti, opened in May and has repeatedly re–opened after each time the Flustapo shut it down.

Both owners have been arrested for their fight against the Pandemic Police. Fines levied against them currently total $130,000 with an additional $15,497.76 per day if the gym reopens.

Until now, sum total of Republican support for their stand against a political quarantine is a two–page letter sent to the governor by recent GOP convert Rep. Jeff Van Drew.

Now Smith and Trumbetti’s situation has changed for the better. Republican US Senate candidate, Rik Mehta has joined their fight. Mehta named Atilis Gym as an official HQ for his Senate campaign. He told Fox News, “Gov. Murphy turned this into a political chess game. And so, what we said is checkmate, governor.”

It’s remarkable that of the two people involved in this drama, Mehta is much more qualified to determine what business, if any, should be locked down than the governor using all the power of the state to crush Atilis Gym. Mehta served as the Senior Deputy Director for the Washington, DC Department of Health and worked for the FDA, while Gov. Murphy is a creature of Wall Street.

Mehta got involved because he was “tired of sitting on the sidelines and watching government’s one–sided control of business. There is no science to support closing the gym. I can assure everyone Frank and Ian have taken the requisite steps to mitigate the virus. I couldn’t stand by anymore and watch them take a beating from the government.”

Mehta told me, “New Jersey doesn’t need a public health policy, it needs a healthy public policy.” The governor has “used public health to create a totalitarian regime.” The gym asked the health department “to look at its risk mitigation techniques and they refused. I was the first politician to visit Atilis Gym. No one from the Murphy administration or the local health department had been through.”

Which only proves one doesn’t need first–hand knowledge to make an arbitrary decision.

By declaring the gym a local campaign headquarters for Mehta for Senate the three allies are assuming the Murphy administration will follow the Constitution, which hasn’t proven to be a sound bet in the past.

“Political activities are exempt from the executive order,” Mehta contends. But that didn’t save the Trump campaign and it might not work for the gym.

There are larger forces at work here. Mehta is convinced these no–science–allowed lockdown orders are part of a larger “strategic play to justify a vote–by–mail election.” Letting muscle–heads return to the gym starts to resemble normal life and that makes stealing the election with a stamp harder to justify.

It would be easy enough for Murphy to declare Mehta a dangerous fringe candidate and WuFlu denier. And follow that excommunication by welding the gym doors shut using its own Olympic bars to do it. If Mehta is correct, Constitutional niceties and a day’s bad publicity aren’t going to be allowed to upset the mass mail balloting strategy.

Even if the gym stays open until election day, the prospects for Wednesday, November 4th look grim. The latest available polling shows incumbent Sen. Cory Booker leading Mehta 58 to 33 percent, which is not grounds for optimism.

What is grounds for optimism is that at least one high–profile conservative joined average Americans on the front line refusing to meekly submit. Mehta was willing to take the risk established conservatives have been dodging since the first selective lockdown order was issued.

Mehta believes, “it takes a lot of courage to do what Frank and Ian did. Some of the greatest accomplishments in our history came from gentlemen who stood up.”

I wrote before there is a lesson for conservative voters who value the constitutional rights that have been quarantined during the Flu Manchu Pandemic Panic. When push comes to shove in the fight to defend the Constitution, the only people in the fight are going to be the people.

Along with Rik Mehta.