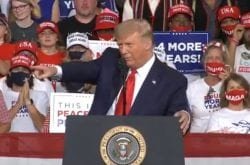 President Trump held a rally in Winston Salem, North Carolina to an overflowing crowd of 15,000 people wall to wall in the airplane hangar in Winston Salem Airport. That’s not counting the tens of thousands that thronged the tarmac of the airport just to get a glimpse of him coming in on Air Force 1.

“They tell me there are 15,000 people here,” Trump said to the packed crowd, “But the fake news media will say that I’m exaggerating as there were only 14,500.” He said to laughter from the crowd.

Trump warned the crowd of the dangers of a Biden presidency who will raise your taxes, take away your guns, and open the borders allowing thousands to come in.”We already have 300 miles of wall completed,” Trump told the crowd and illegal entrance is way down. We want people to come in but, they must come in legally and with merit.”

Over the Labor Day weekend and previous weekend’s, lakes all across America held Trump Boat parades. One of the largest was a 2000 boat parade held in San Diego bay in Calif. Compare this to the lack of enthusiasm for Biden.

So far Biden has proven to be a weak, frail, feeble old man who has no enthusiasm and has under a hundred people show up when he does come out of his basement bunker. You can be sure if he wins,the plan will be to use him as a figurehead while others run the presidency their way or get him out because of cognitive medical issues and have Kamala Harris take over.

“The former vice president’s episodes of confusion are an indicator that leftists like Kamala Harris “will be in charge” if Biden is elected president, “Trump Jr. told the Washington Examiner.

In a speech Monday, Biden scoffed at the idea that he’s a “radical socialist with a soft spot for rioters,” but according to Trump Jr., it doesn’t much matter where Biden stands on the political spectrum.

In an interview with the Washington Examiner, Trump Jr. repeated the charge made by his father that Biden is a mentally fading ‘puppet’ of the far-left, speculating that the media “loves Joe Biden” because they believe they can mislead voters about the fact that the more radical Harris “will be in charge.

A poll from the conservative Heritage Foundation found that 41 percent of respondents agree that Biden “suffers from some level of diminished mental capacity” and that his administration would be run by “very liberal socialists,” according to the Examiner. Similar polls have borne out that voters don’t need much convincing that Biden will have difficulty governing the country.

While Biden’s record already shows a tendency to “flip flop,” his health raises even more grave concerns about the consequences of a Biden victory, Trump Jr. said.

“It’d be a joke if this was a grandfather, you’d say, ‘Fine, he’s forgetful.’ This is a guy that’s a contender to hold the nuclear football. That should scare us as Americans.

Yes, Trump jr.is right.  Biden has been flip-flopping more times than a fish out of water.  He was recently confronted by a reporter and said that Trump was the only person calling for defunding the police. He said, “I’m the one calling for $300 million more for local police, for community policing … The only person calling to defund the police is Donald Trump. Look at his budget. He calls for cutting police funding for local — state and local help by $400 million. Once again, he’s pathological.”

Democratic presidential nominee Joe Biden declared on Aug. 13 that he would call for a nationwide face mask mandate.

During Biden’s acceptance speech on the final night of the 2020 Democratic National Convention, he firmly declared that he would implement a national mask mandate if elected president.

However, Biden walked back his national mask mandate on Sunday, admitting that it would probably be unconstitutional.

In a tweet, Biden laid out some of his presidential plans.  As president, I will: – Call for nationwide mask mandates (which he just backtracked on) – Implement widespread testing (Trump already has done that) – Accelerate the development of treatments and vaccines (Trump is doing that now) I’m ready to work on day one to contain the spread of this virus and get our country back on track.

The USA Today/Suffolk poll, that was released Sunday, reveals that 47% of registered voters expect President Trump to win the debates. Only 41% of voters expect Biden to win, a figure well below the percentage of support the former Vice President usually gets in national polls.

Independents were even more likely than the general survey respondents to suggest that President Trump would win the debates, with 47% saying he would win and 37% believing Biden would win.

How can they expect Biden to win? Haven’t they seen his responses to questions and how he can’t remember where he is half the time? The survey may indicate that a broad segment of the American public is aware of Biden’s seeming cognitive decline and that they don’t expect the Democratic Party’s elder figure to be the sharpest on his toes when he tees with the President. The first of the three planned presidential debates is slated on September 29th, with Fox News liberal Chris Wallace being tasked as a moderator.

Trump will hold a rally on Thursday in Mich.and Sat in Reno, NV, and Sunday in Las Vegas.

Check out this fabulous video of the 2000 boat parade for Trump in San Diego  Bay on Labor Day.

Trump Campaigns To Huge Crowds While Biden Campaigns To Small Crowds From His Basement is original content from Conservative Daily News – Where Americans go for news, current events and commentary they can trust – Conservative News Website for U.S. News, Political Cartoons and more.