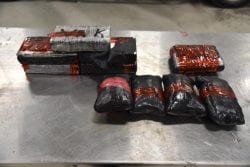 “The smuggling of illicit narcotics is a serious international health and security threat,” said Acting Port Director Andrew Douglas, Laredo Port of Entry. “CBP will continue to intercept these dangerous drugs through our vigorous enforcement actions.”

The seizure occurred on Monday, August 31st, when a CBP officer assigned to the Juarez-Lincoln Bridge referred a 2006 Chevrolet Avalanche for secondary inspection. The vehicle was driven by a 40-year-old male U.S. citizen traveling from Mexico. CBP officers examined the vehicle utilizing a non-intrusive imaging system examination, resulting in the discovery of 10.84 pounds of black tar heroin, 2.73 pounds brown heroin and 12.38 pounds of cocaine hidden within the vehicle.

The narcotics have an estimated street value of $452,740.

CBP officers seized the narcotics and vehicle. The driver was arrested and the case was turned over to U.S. Immigration and Customs Enforcement-Homeland Security Investigations (ICE-HSI) special agents for further investigation

Laredo CBP Officers Seize Over 400K Worth in Hard Narcotics in One Enforcement Action is original content from Conservative Daily News – Where Americans go for news, current events and commentary they can trust – Conservative News Website for U.S. News, Political Cartoons and more.

Which Border Is Higher Priority?

Biden’s Foreign Policy “Vision” Is Blind As A Bat

Which Border Is Higher Priority?

How to use Slack channels – The Verge