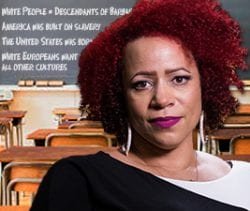 Marxist-Progressives do this in a sort of perpetual motion. They never stop. They are constantly re-writing the narrative; constantly re-writing history to support their narratives and redefining words to facilitate the constructs of those narratives. To them, truth is relative to the current lens and has no context. This is what happens when ideologues are tacitly allowed to manipulate the established facts of history.

One such effort to manipulate US history comes in the 1619 Project from The New York Times. This effort provides further and undeniable proof that The Times has succeeded in its transformation from journalistic enterprise into a Marxist-Progressive propaganda machine. The criminal thing in it all is this. The New York Times still fraudulently sells its product as a newspaper.

The 1619 Project, in a nutshell, proposes that the United States did not begin in 1776 with the Declaration of Independence, but in 1619 with the African slave trade arriving in Virginia. It further looks to re-write US history to read that the Revolutionary War was not fought to establish independence from an oppressive British Empire, but to protect the institution of slavery.

While true historians from across the nation immediately took issue with this fraudulent recounting of American history, The New York Times stood steadfastly behind the project’s creator, Nikole Hannah-Jones, a Black-centric activist who has made outlandish claims in addition to her opportunistic bastardization of the founding of our country:

In the aforementioned letter to the editor, Hannah-Jones states:

“Europeans have colonized and destroyed the indigenous populations of every continent of this planet. They have committed genocide against cultures that have never offended them in their greed and insatiable desire to control and dominate every non-white culture…[and are] no different then [sic] Hitler. The crimes they committed were unnecessarily cruel and can only be described as acts of the devil…

“It was not enough for whites to come to the Americas and learn, they looked upon the native people as inferior and a people to be annihilated. Their lasting monument was the destruction and enslavement of two races of people…

“Even today, the descendants of these savage people pump drugs and guns into the Balck [sic] community, pack Black people into the squalor of segregated urban ghettos, and continue to be bloodsuckers in our communities.”

She ends her racist screed by declaring that the “descendants” of “these barbaric devils” “need to constantly prove their superiority.”

I’ll refrain from commenting on the fact that for a Pulitzer Prize-winning New York Times columnist and Notre Dame and UNC Chapel Hill graduate her spelling and grammar are atrocious.

Any rational mind can see that at her core, Hannah-Jones is a racist. She sees everything through the lens of race, rejecting Dr. Martin Luther King, Jr.’s true statement of equality that we should judge people on the content of their character not the color of their skin.

So, while we have deduced that Hannah-Jones is the worst kind of racist – one who profiteers by crafting false narratives that fan the flames of division and cause societal unrest, the truly dangerous aspect of this story is that Hannah-Jones and The New York Times have shopped this fraudulent history to the education system.

California’s Department of Education has created a draft model that includes some of the 1619 Project in its history classes and Washington, DC, and Chicago have done the same in their curriculums. Our school children are being taught the ideological propaganda of racism, crafted by a racist, to perpetuate the falsehood that the United States suffers from a life-long history of systemic racism.

On September 6, 2020, the President himself warned that any school system using any part of the 1619 Project, or incorporating any of its themes into its curriculum, could face denial of federal funding. He issued a directive to the US Department of Education to investigate every instance of its use and/or incorporation.

In the beginning, when he was a candidate for the presidency, I had my issues with Donald Trump. I believed that there were others on the GOP debate stage that were more qualified for the job. But in this moment in time, those beliefs have been proven wrong, and demonstrably so. This outsider has done more to better the condition for the common man; for the average citizen than any president since Abraham Lincoln, doing so while marginalizing the unearned status of the ideological and political elite.

In Donald Trump’s singular actions to protect the integrity of American history in our schools and divest the federal government from ideological indoctrination, he has earned the right to steward the nation for four more years. And make no mistake, Nikole Hannah-Jones and her Black supremacist “BLACKTIFA” brethren won’t take that sitting down.

The Left’s Real-Time Attempt to Rewrite US History is original content from Conservative Daily News – Where Americans go for news, current events and commentary they can trust – Conservative News Website for U.S. News, Political Cartoons and more.