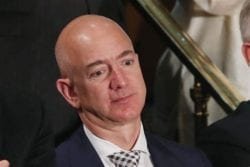 The Pentagon reaffirmed its decision Friday to give a $10 billion cloud-computing project to Microsoft instead of Amazon, marking the second time in one year that the Trump administration bypassed the online giant’s attempt to secure the program.

“The Department has completed its comprehensive re-evaluation of the JEDI Cloud proposals and determined that Microsoft’s proposal continues to represent the best value to the Government,” Russ Goemaere, a Defense Department spokesman, told The Washington Post.

The DOD initially awarded the project to Microsoft in October 2019 until Amazon filed a lawsuit. JEDI would give the Pentagon a single cloud computing system for data ranging from personnel statistics to intelligence information rather than the hundreds the military currently uses.

“DoD is eager to begin delivering this capability to our men and women in uniform,” Goemaere said before adding that the contract could not begin until after the legal battle is completed.

Amazon called the “DoD’s re-evaluation nothing more than an attempt to validate a flawed, biased, and politically corrupted decision” in a statement Friday on the company’s website.

Trump asked for an investigation into the contract over concerns that the contract requirements had been tailored for Amazon. Defense Secretary Mark T. Esper then launched his own “review” of the department’s approach. The Pentagon soon awarded JEDI to Microsoft, prompting a lawsuit from Amazon.

Amazon was long considered a front-runner for the project, but the tech behemoth fell out of favor after Trump found out about the deal. The decision to give Microsoft the deal came in October 2019 after Trump, a Bezos critic, instructed the DOD that August to put the contract on hold.

Amazon’s lawsuit put a grinding halt to JEDI. A judge eventually concluded that officials made mistakes while they were evaluating Microsoft and Amazon’s applications. The DOD then asked to redo the award.

The DOD, in reaffirming its initial decision, is arguing whatever mistakes the agency made were not significant enough to impact the project.

Trump’s DOD Delivers Another Big Blow To Bezos, Gives $10 Billion Cloud Project To Microsoft Instead Of Amazon is original content from Conservative Daily News – Where Americans go for news, current events and commentary they can trust – Conservative News Website for U.S. News, Political Cartoons and more.

SHOCK: Americans are still able to vote, even after Republicans block Democrats bill

How to get more space in your Google storage

SHOCK: Americans are still able to vote, even after Republicans block Democrats bill