Ripple prices are down today on their Monday high, opening on the markets at $0.95, according to CoinMarketCap.com.

XRP prices rallied around rumours of Coinbase support on Monday morning, climbing as high as $1.08 by midday – the highest Ripple price since February.

But Coinbase pushed back against the rumours, denying any plans to adopt Ripple into its services.

It has since announced that it wil be launching a crypto fund instead for investors.

“Our team is committed to bridging the gap between the global investment community and the digital currency asset class.

“We remain focused on product creation and will continue to launch more single-asset and diversified products to provide exposure where investors are looking for it.”

The news follows the company’s announcement earlier last month of launching a fund based n the cryptocurrencies with the largest market capitalisations.

7am: Sebastian Kettley takes over live reporting from Dan Falvey. 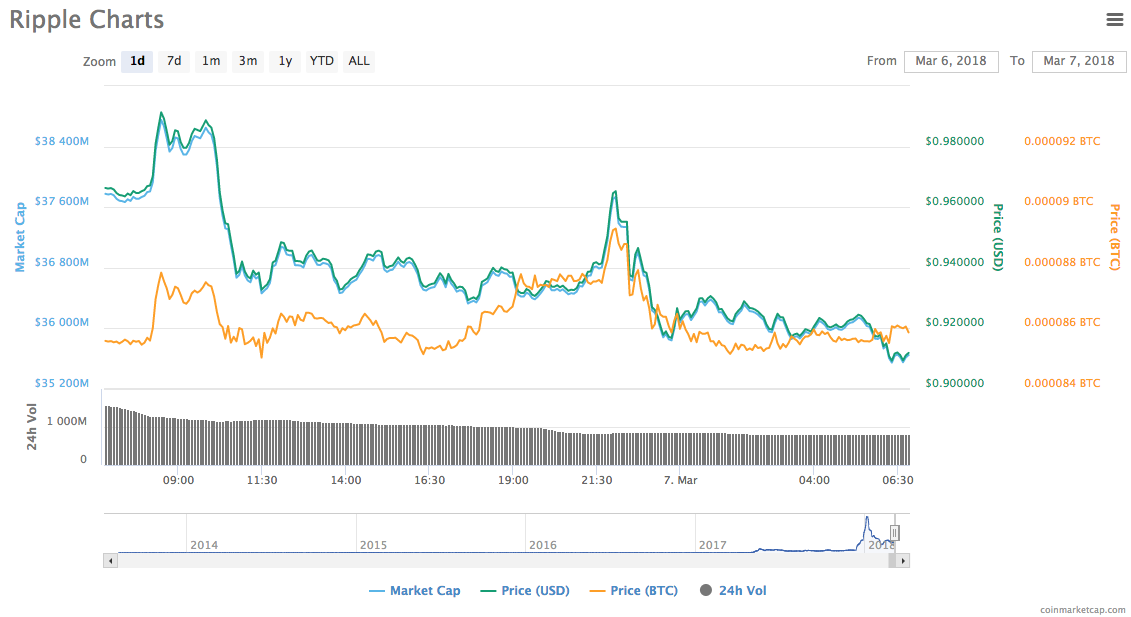 Ripple price LATEST: XRP is floating below the $1 mark today

6.01am: US judge say Ripple can be regulated

A US district judge has said that Ripple and other cryptocurrencies can be regulated as commodities by the U.S. Commodity Futures Trading Commission.

It is the first step to regulate digital currencies in the US.

Asiff Hirji, President and Chief Operating Officer for Coinable, has said that at the moment only US residents will legally be able to invest in the new product.

He argued SEC oversight was responsible for the decision.

Ripple’s price has began to recover since its initial tumble after the announcement about Coinbase. 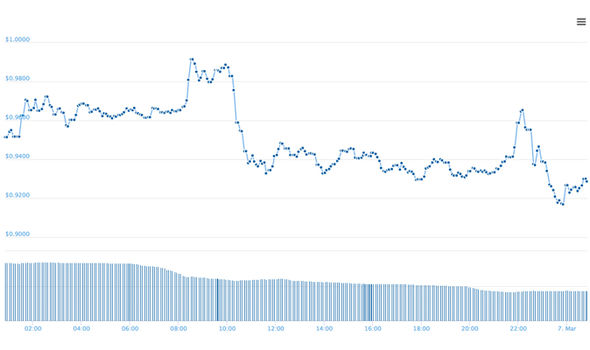 Ripple’s price has began to recover

Coinbase are only opening their product to accredited investors after warnings from the US Securities and Exchange Commission (SEC) who are concerned about cryptocurrency financial products.

Dalia Blass, the US Securities and Exchange Commission Director of investment Management,said: “There are a number of significant investor protection issues that need to be examined before sponsors begin offering these funds to investors.”

The fund will give investors exposure to all assets listed on Coinbase’s institutional exchange, GDAX, weighted by market capitalization, Bramanathan said.

Whenever a new asset is listed, it will be automatically added to the fund.

He said: “We’re seeing strong demand from our customers and the market generally for a passive investment management product.”

10.35pm Coinbase announces the launch of a new index fundCoinbase, the world’s largest cryptocurrency company, has announced it is launching a new index fund open to US accredited investors.

Coinbase’s President & Chief Operating Officer Asiff Hirji told CNBC in an interview on its “Fast Money” programme at 5.30pm ET (10.30pm GMT) that the company would launch a crypto-focused index fund for investors with a specified net worth.

The launch marks the $1.6 billion company’s first foray into asset management and will be weighted by market capitalisation.

There had been hopes that XRP would be added but this rumour has now completely been quashed.

XRP fell shortly after the annoucement but quickly regained form to steady itself to $0.94

The “major announcement” on Coinbase is still to be revealed but XRP has shot up to $0.96 in anticipation over the last twenty minutes.

The son of the late Wu-Tang Clan rapper Ol’ Dirty Bastard is launching his own cryptocurrency token.

He said: “Crypto is very big. The blockchain is one of the biggest inventions of our time.

“And I don’t want to be out of the party, I want to come in to the party.”

The cryptocurrency is being produced in partnership between the estate of Ol’ Dirty and Link Media Partners, an entertainment industry firm.

Ripple price update: XRP is holding steady at $0.93. It has clawed back earlier losses and is now down only 6.82 percent on the last 24 hours. 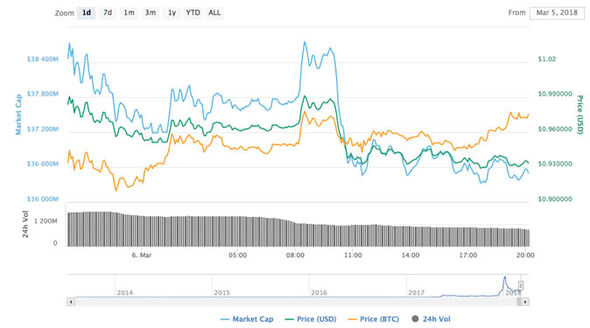 6.50pm: Google searches for Bitcoin down by 40 percent after crypto price falls

Google searches for Bitcoin have taken a sharp dive since the cryptocurrency peaked in price at $19,932 in December.

The latest Google Trends data show searches were at their lowest level since October, down by 40 percent.

Searches dropped by 80 percent in December alone, just as the price of Bitcoin peaked.

The cryptocurrency has been struggling in the markets this year, indicating the decline in searches has mirrored Bitcoin’s drop in value.

Hut 8 Mining Corp declined in value on its first day of trading on the Canadian stock exchange.

The cryptocurrency mining company, backed by billionaire investor Mike Novogratz, fell to C$3.51 at 11am in Toronto (4pm GMT time) after opening at C$4.70.

“This is also why many competitors are entering the market, because of the margins.

“With these margins, competitors undoubtedly come in. But what makes us different is we have our chips allocated through Bitfury.”

Bitfury is a blockchain technology company set up to rival leading Chinese competitors.

3.40pm: Cryptocurrency NEO tipped to join Coinbase along with Ripple

NEO could be another digitial currency poised to join Coinbase, according to Crypto Daily writer Robert Johnson.

The China-based cryptocurrency, which lies in sixth place in the market table, could be “the next addition to the growing crypto family”.

Speculation about Ripple and Coinbase has been rife since yesterday ahead of an apperance by Ripple founder Brad Garlinghouse later today on CBNC’s Fast Money.

However, neither Coinbase nor Ripple have yet to make an official annoucement.

3.25pm: Ripple in red, along with all major cryptocurrencies

The Wall Street giant’s latest job postings says “knowledge of cryptocurrency is a plus.”

Earlier this month a note penned by the company’s executive director James Faucette, explored how bitcoin can be utilised to improve the world of finance.

The note said: “Bitcoin has emerged as a growing focal point within the payments industry, both for its disruptive potential as well as the potential costs savings that blockchain may help unlock.”

KryptoTech Blockchain Technologies, SL, a company specialising in the development of blockchain technologies is releasing this month a crypto payment card.

The new Nexank card can be charged in Euros thanks to an internal bitcoin wallet, as well as 40 other virtual tokens including Monero, Litecoin and Ethereum.

The Nexank card works very much as a pre paid MasterCard card and can be very much used like any other payment car you already have in your wallet. 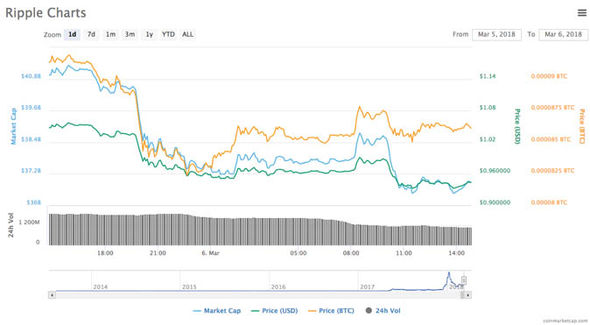 Ripple PRICE: XRP is trading just below the $1 mark

Block and Jerry’s, a playful twist on the classic Ben and Jerry’s ice cream brand, is a new startup built solely on the still in-development Lightning Network.

Founded by a group of enthusiastic college students in San Fransisco, Block and Jerry’s will delivery ice-cream around the city.

Co-founder Rob Durst said: “We think that this is a motivating factor to jump into bitcoin and start playing around with the Lightning Network and getting to understand it.”

Developer Jeff Tang added: “Basically we’re just a household of guys who are interested in cryptocurrency and creating web applications for people.”

At the moment, the comfy only accepts bitcoin for payment and it remains to be seen if the business will take off in the long run.

Ripple prices were briefly back in the green on Monday after online traders shared news of Coinbase supposedly adopting XRP support.

But the rumour have so far been denied by the US-based change, which confirmed on Monday it had made “no decision” on the matter.

Coinbase is a leading US cryptocurrency exchange trading bitcoin, ethereum and litecoin among others. 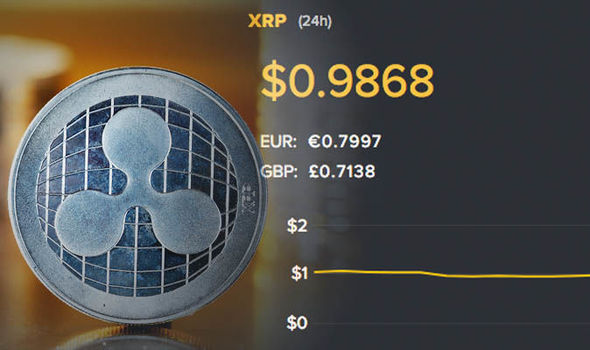 According to James Song, founder and CEO of blockchain startup ExsulCoin, the rumours triggered a “speculative frenzy” of buying among traders.

Jeff Koyen, CEO of 360 Blockchain USA, agreed that the price hike was a direct result of the rumours.

He said: “Ripple’s overnight pump may be based on real news, but I’m inclined to think it’s the Coinbase rumour.”

“If the Ripple rumour turns out to be true, I expect we’ll see a proper bull run for XRP, maybe up to $2 if Bitcoin’s price holds steady,”

“Larger buys in advance of expected news in these markets are then compounded by retail investors buying out of FOMO and trying to chase gains.”

Earlier in January, Coinable assured its customers that the addition of all new assets will publicly announced on via the company’s blog and other official channels.

We Just Got Proof That Uber Has Saved Thousands of Lives

Australia warned to ramp up war defences as US unable to stop China ‘We’re not prepared!’ | World | News